(Psilocybe Cubensis, Burma) is a new and upcoming shrooms strain made popular in recent years. Burma means the loss of colour pigmentation; meaning this Burmese strain has lost its golden colors and appears to be like an albino strain. Unlike true albino strains, the burma Burmese still has brown spores. As the name describes, this strain originates from the country of Burma, now called Myanmar.

This mushroom strain has been very popular amongst the online mycology community as its proven to be a prolific fruiter which yields greats results for growers. The spores originate from an online mycologist who goes by the name BAS. The origin story of the Burma strain dates back to the 90s when John W. Allen, a famous Ethno-mycologist who received the spores from one of his students. We think it’s pretty amazing that the online mycology community continues to honor the original strain yet works to improve or develop new exciting strains such as the Leucistic Burma. 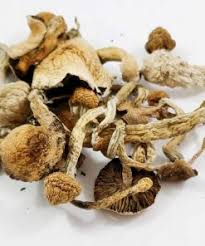 In general, psilocybin causes changes in mood, changes in thought-pattern, and, at higher doses, hallucinations. Less-enjoyable effects commonly include excessive yawning, nausea, and sometimes even vomiting. Severe reactions, such as convulsions, are very rare, but they can occur. Psilocybin has shown medicinal potential, and many people use mushrooms to self-treat a wide variety of conditions, from migraine headaches to anxiety. Unfortunately, the scientific research on these claims is still in its infancy, in part because of the legal barriers to clinical study.

“Mood changes” mean, ideally, euphoria and a feeling of connectedness, though some people instead experience anxiety—which can be intense and disturbing. Some users explain the radically different possible effects by saying that psilocybin simply enhances whatever the user was already feeling. This is one reason why proper mental preparation for the experience, together with a safe and enjoyable setting, are so important

Burma mushrooms are generally said to produce an intense and enjoyable experience, but with little of the insight encouraged by other strains.

The Burmese strain is known to be one of the stronger shrooms strains. We wouldn’t say it’s as strong as the Penis Envy strain, but you can expect more potency compared to the average Psilocybe Cubensis strain. Our staff report a mix of effects from consuming the Burma strain, but you can expect classic magic mushroom effects such as feeling transcendence and unity with the world. This strain can be enjoyed alone for healing or together with friends for good-old fun.

Burma is not an especially picky strain. Any mushroom growing method normally used with P. cubensis will work. Several different brands of grow-kits are available for the Burma strain, or growers can build their own set-ups from scratch (See: PF Tek, Monotub Tek, Shotgun Fruiting Chamber) and start with spores.

Burma is generally considered a very fast-growing strain, with a colonization time of only days. However, the biggest influence on how quickly spores germinate and how quickly they grow may not be the strain but rather the age and health of the spores. The important thing is for growers to get good spores no matter what strain they use.

It’s possible to calculate a rough estimate for proper P. cubensis dosage, based on the strain, whether the mushrooms are fresh or dried, and what kind of experience the users want—from microdosing on up to a “heroic dose.”  But even within a strain potency can vary, and some people are more sensitive to psilocybin than others. So dosage guidelines can only ever be just that, guidelines. Burma simply has a smaller starting point than most other P. cubensis strains.

It’s best to err on the side of a dose that is too small, rather than too large, since unpleasant side effects are more likely at higher doses.

Be the first to review “Burma mushrooms” Cancel reply